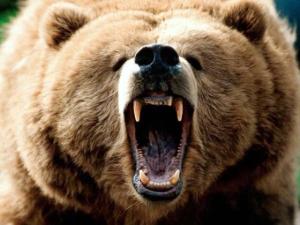 Let me say from the start this post has nothing to do with the Chicago Bears.

Rather, what follows is one of my favorite stories to teach at camp. Most kids don’t know this story, so it kind of freaks them out while at the same time I get to emphasize the importance of respecting your Bible teacher–me! Okay, that’s not the real point, but it’s kind of fun to tell campers that if they don’t treat you with respect, bears might come out at night at eat them!

Along time ago, in Bible lands far, far away there was a prophet named Elijah. He spoke to the people for God, warning them to stop sinning and return to following Him. Elijah was taken up to heaven in a whirlwind and a chariot of fire pulled by horses of fire. (Probably a future freaky blog post!)

And this is where our story begins.
(Disclaimer: This is an Elisha and the Two Bears, not a Goldilocks and the Three Bears Kind of Story)

After EliJAH goes up to heaven, EliSHA takes his place. After healing some water with a little salt, (yet, another freaky story) Elisha heads up to the town of Bethel where, while walking along the road, he encounters some youths who come from the town and begin to make fun of him.

Upon hearing them, Elisha turns around, looks at them and calls down a curse on them in the name of the Lord. (Da Man!)

Then two bears come out of the woods and maul forty-two of the youths. (Da Yikes!)

And Elisha goes on to Mount Carmel and from there returns to Samaria. (I always imagine him whistling as he walks for some reason, but oh well!)

Well, not really. This is truly another one of those, “WAIT! WHAT! HOLD ON!” kind of Biblical accounts. I mean, seriously, what in the world? Mock someone and bears maul you? There would be a serious decline in mockery if this was the case.

Still. Mauling bears. Seems a little intense. Unless you remember that these are God’s people–even though they are young–who entered into a covenant relationship with Him, promising to follow and obey, but failing to do so. God’s warnings to them from the prophets have been that if they continue is disobedience there would be judgment coming. If they would return to Him, keeping their promises, there would be blessings. But if not, curses.

Honestly, after an event like this one, the people of Elisha’s day should have “bearly” failed to miss God’s point!!! Yet, they did. So judgment came, captivity followed, and restoration completed the promises of God towards His people at that time. All of which remind me of the times we live in now, the warnings God is sending and His promises yet to be fulfilled.

And that’s the story of Elisha and the Two Bears.
Da End